The Customer who has foreign driver’s license, it is mandatory to have one of the following driver’s license to drive a car in Japan.
・International Driver’s License. (Issued based on the Geneva convention 1949.)
・Foreign Driver’s License (Switzerland, Germany, France, Taiwan, Belgium, Estonia, Monaco) and Official Japanese Translation Document

International Driver’s License. (Issued based on the Geneva convention 1949.)

Parties to the 1949 Geneva Convention:

If you hold a driving permit from Switzerland, Germany, France, Taiwan, Belgium, Slovenia, Monaco, you may use your driving permit in Japan for one year after arrival, as along as you provide a Japanese translation of the permit. Please bring both documents and passport to us. 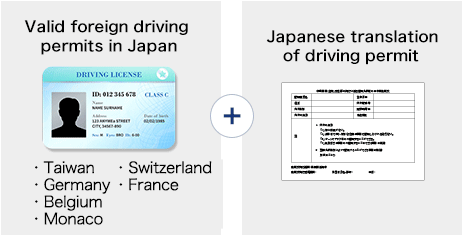 You may issue a Japanese translation at your embassy, consulate, or JAF. Click on the following link to find out more about JAF. If you hold a permit from Taiwan, you must issue a translation from JAF or the East Asia Relations Commission.